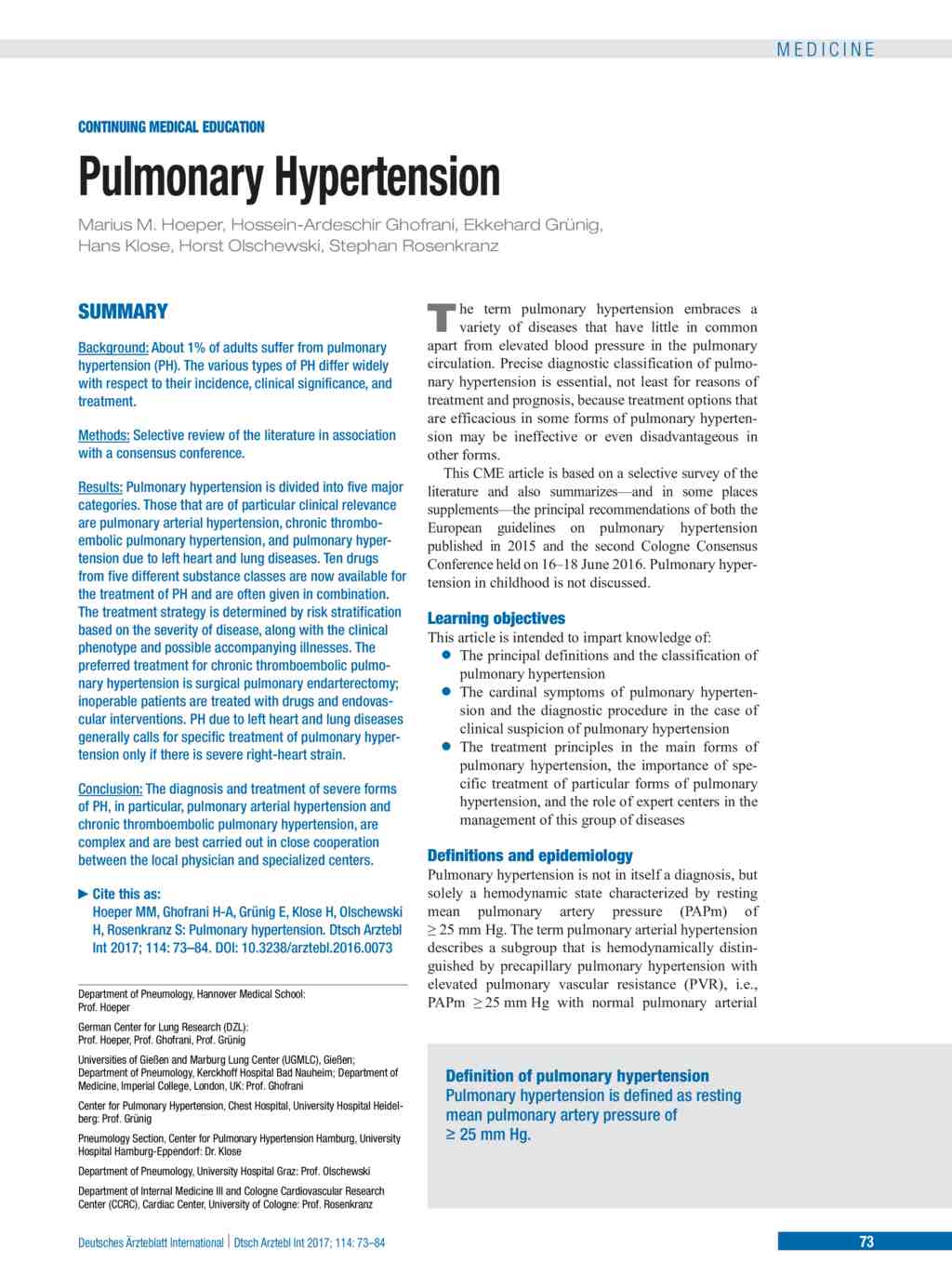 
The data come from a large number of pulmonary hypertension centres in the USA although not all of them and now encompass more than 3, patients.


This very large database has given us important insights into pulmonary hypertension but the authors of the various papers associated with REVEAL will be the first to admit that it does not encompass the whole of the USA and includes patients in whom a diagnosis could have been made some time before, i. The second major database is that of the French registry. It also contains a mixture of incident and prevalent patients and there have been recent analyses by our French colleagues to separate out the characteristics of patients with prevalent disease from those with incident disease.

Interestingly, the French have shown that prognosis can be quite different, i. The latest registry to be described is the UK and Ireland registry [ 2 ].

The UK and Ireland registry would appear to have a number of particular features that will make it of interest. First, it is a registry of incident patients only. Thirdly, the registry has been open for 10 yrs and, therefore, it is possible to track the change in demographics of each cohort of patients as they come through the system.

There have been good reviews of the diagnosis and management of pulmonary hypertension associated with left ventricular dysfunction [ 3 — 5 ]. Interestingly, some authors have shown that the phosphodiesterase-5 inhibitors sildenafil or tadalafil can improve pulmonary hypertension due to left ventricular diastolic dysfunction [ 6 ]. However, I believe that this remains experimental therapy and should not be used in normal circumstances. In addition to the pulmonary arterial hypertension seen most commonly in Europe and the USA, there are new classifications of pulmonary arterial hypertension which, although mentioned in the Dana Point classification, are rarely seen in first-world countries.

A concern that does exist in the west is that some of the therapies we use for other conditions can actually cause pulmonary hypertension.

This is of great interest because, of course, imatinib, another tyrosine kinase inhibitor, is under trial at present for the treatment of pulmonary hypertension so, potentially, we have drugs that both cause and treat the condition belong to the same class. The accepted traditional view of the pathobiology of pulmonary arterial disease is that there can be a genetic predisposition e. BMPR2 mutation , which, when associated with a second hit such as an inflammatory disease, an environmental factor, hypoxia or other stress, can cause pulmonary arterial hypertension but there are a number of new concepts in development.

However, there is increasing evidence that circulating cells are important in the generation of the pulmonary arteriopathy and, in particular and most recently, there is evidence that circulating fibrocytes derived from the bone marrow occur in children and young adults with pulmonary hypertension. It appears that these mesenchymal progenitor cells are capable of regulating fibrogenesis in the pulmonary arteries. Their numbers correlate with clinical and haemodynamic variables [ 9 , 10 ]. One feature of pulmonary arterial hypertension that is always of interest to epidemiologists and clinicians is the preponderance of females with the disease.

Unfortunately, these trials were unsuccessful and the idea that inflammation was associated with pulmonary arterial hypertension was largely abandoned. However, the interest in this relationship has been rekindled and a number of laboratories are investigating the connection. This is reviewed by P rice et al. While it is surprising that anti-inflammatory drugs have so little effect on pulmonary hypertension with the important exception of systemic lupus erythematosus and some patients with mixed connective tissue disease , the ongoing interest is in whether the inflammation seen in pulmonary vessels in patients with pulmonary arterial hypertension is a primary cause of the arteriopathy or is a consequence of the other stimulating causes that are known to be aetiological, such as hypoxia, bowel disease, liver disease, etc.

Elastic staining of paraffin-embedded lung tissue. A pulmonary arterial lesion from a patient with idiopathic pulmonary arterial hypertension, illustrating the perivascular lymphocytic infiltrate centre , a small pulmonary artery left and a bronchiole right. Haematoxylin and eosin elastic stain. Reproduced and modified from [ 13 ] with permission from the publisher. A whole new area of genetics that will clearly have a significant impact on our understanding of pulmonary hypertension and pulmonary vascular disease is epigenetics.

There are four types of epigenetic regulation. The area of epigenetics that has had the most impact on our thoughts about pulmonary hypertension is microRNAs.

This does suggest a high specific role of this particular microRNA in the understanding and possible treatment of this disease. The second study was an examination of miR and its role in lung and heart function in pulmonary hypertension [ 18 ]. The authors examined the role of microRNA inhibitors called antagomirs in experimental hypoxia and monocrotaline-induced pulmonary hypertension in rats.

They found that antagonists to miR and miR reduced haemodynamics in these animals and also decreased pulmonary artery muscularisation. The antagomir to miR also reduced right ventricular hypertrophy and improved right-sided haemodynamics. The plexiform lesion, which is a complex abnormality of the endothelium, is thought to be pathognomonic of idiopathic pulmonary hypertension fig. Interestingly, although it is present in patients with IPAH, very few of the animal models will show this lesion, an exception being the sugen hypoxia model [ 20 ].

Two new studies have shown that long-term epoprostenol, which is perhaps the most powerful anti-pulmonary hypertension drug we have had, while showing clinical improvement, actually showed at death that the plexiform lesions had persisted despite this long-term therapy [ 21 , 22 ].

Plexiform lesion from a patient with severe pulmonary hypertension demonstrating the exuberant proliferation of cells that comprise the lumen of the small pulmonary artery. Multiple slit-like vascular spaces are all that remain of the original lumen Haematoxylin-eosin. Reproduced from [19] with permission from the publisher.

This raises two possible explanations. First, it may be that the plexiform lesion, although pathognomonic of pulmonary arterial hypertension, is not actually an indicator of progression or deterioration. Although that it can be quite widespread, it can also be quite patchy in its development. Secondly, drugs such as prostacyclin work in ways other than reversal of the histopathology of the disease. As already stated, left ventricular dysfunction, both diastolic and systolic, are causes of pulmonary hypertension but treatment should be primarily aimed at the heart rather than trying to open up blood vessels.

P ark et al. Reactive pulmonary hypertension is said to have occurred when there is a rise in pulmonary vascular resistance. It would appear that when this develops, the prognosis is a great deal worse. It does not, however, suggest that the treatment of the pulmonary venous hypertension should include pulmonary vasodilating drugs [ 3 ]. The one exception to this rule appears to be use of the phosphodiesterase-5 inhibitor sildenafil, which may help patients with left ventricular dysfunction [ 6 ].